Joe Blues and the Backseat Drivers had some more success and released the album 'Can't Be Too Old for the Blues' garnered some radio play in several European countries and saw via iTunes worldwide. During production on the follow up CD, 'One Step Forward, Two Steps Back', Keith made the decision to move back to the East Coast with his family. After moving back, Keith took a 2 year hiatus before starting a new Joe Blues and began playing the local clubs in South Central Pennsylvania and Maryland. That's when he eventually met Chris Brandon (drummer) and the name was once again changed to Jo' Blues.They recordered a 6 song CD in 2011 named 'Bet Your Ass I Got the Blues'. The title track quickly become a fan favorite.

The Band released 'Perfume and Gasoline' in July 2018. It contains 10 rock-blues songs, including 9 originals by the band as well as a Willie Dixon cover that pays homage to not only Dixon, but the band Foghat as well.

In early 2019, Michelle Lucas joined the band as a second bass player filling in on most of the electric shows as Steve decided to go into partial retirement from the music scene.

2020 started off with another change as Christine Cersley has stepped into the role of the full time bass player in the band. A well-known, respected musician in the Hagerstown area, she has been great. then the pandemic kinda changed everything for a while!

In 2021, we have welcomed back Steve as the core bassplayer for the band. However, we are continuing to do shows with Christine as well! Not only that, but Keith has teamed up with Christine and Drummer Ragan Potts for some shows as an alternative version of Jo' Blues. A tasty morsel that has a slightly different take on some of the material and keeps everything moving forward and fun can be had for all (Pat!)!

All albums are available on nearly any digital outlet as well as at live shows.

Jo' Blues is definitely 'not your daddy's blues band' as put by one club owner. They are bluesy, but rock hard as well. Check them out!!! 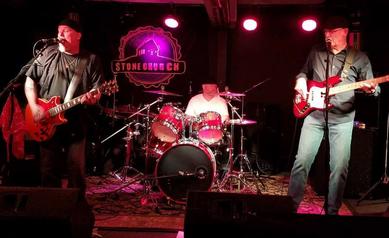 The album was mainly acoustic with a couple new songs as well as some re-recorded songs Keith had originally intended to be on the second Joe Blues and the Backseat Drivers CD. The CD was released on iTunes and has had some international radio play and sales as well. In the early summer of 2016, Steve Reasner joined the band as the bass player and completed the trio line-up with Chris on Drums and Keith on Guitar and Vocals.

On December 9th, 2016, a regularly scheduled show became a benefit for a 4 month old boy named Liam Kennedy to raise money for the mother to help pay the escalating bills related to the little one's congenital heart defect and was donated to www.gofundme.com/beckyandliam  The show was recorded in it's entirety and some of the tracks were chosen for a live album released in April of 2017. The CD consists of 12 original tracks from the Jo' Blues 16 year history, including a reimagined song written by Keith back in the early nineties. ​

Jo' Blues has been around in some form or another since 2000. Originally started by Keith

some personnel changes, the name was changed to Joe Blues and the Backseat Drivers.